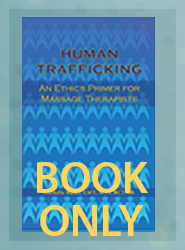 Human trafficking is an incredibly large, mostly secret, and emotionally horrific industry. The business is estimated to bring in $150 billion a year. Unfortunately, most people feel it isn't something they will see or experience, or ever have to deal with. And we rarely talk about modern slavery, except for a few celebrities who speak out, such as Ashton Kutcher. Most people assume it has to do with the sex industry and so will never affect them. Because we don't talk about modern slavery, or because we don't understand it and aren't well informed about it, the majority are misinformed or just plain unaware.

And those of us in the massage profession can easily wonder why it would matter to us. Many of our professional organizations include statements condemning human trafficking and encouraging therapists to sign a pledge to oppose human trafficking. But we may wonder what this has to do with us and what we could do about it anyway.

This BOOK is designed to remove many of the misconceptions and misunderstandings around human trafficking as well as give you actions you can take and ways you can help. As noted in the quote above from Barack Obama, is concerns every one of us.

What you will learn:

Items in Your Cart

Your cart is empty
Visit The Shop

There are 2 ways to get this book: