During the course of attending massage school at A New Beginning School of Massage, students are given a number of assignments that requiring research and writing. Some of these assignments result in very insightful and  well thought out information and  decision-making outcomes. I am happy to share some of their assignments for you to enjoy. 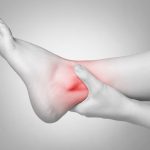 Why I chose this client/condition?  Ankle sprains are a common injury for any person and this was the only condition that I came across that required some further research.

Summary of client condition:  The client was playing soccer when his left foot planted awkwardly causing his ankle to roll out, injuring the lateral ligaments, specifically the anterior talo-fibular ligament. The injury occurred three weeks prior to his massage. He did have quite a bit of swelling and bruising following the injury, but that had almost completely resolved except for some minimal swelling. The ankle was not painful at the time of the massage. He had been elevating the foot and ankle as well as taking over-the-counter anti-inflammatory medications, was wearing an ankle sleeve and modified his activities since the injury. He mentioned that he has sprained his left ankle a couple of times over the past ten years and it is a bit lax.

My understanding of the condition:  An ankle sprain occurs when at least one ligament surrounding the ankle joint tears or stretches beyond its capacity. This can happen in many different ways, such as walking on uneven surfaces, rolling and twisting the foot while playing sports or landing awkwardly after jumping. Symptoms of ankle sprains include swelling, discomfort/pain, possible bruising and instability. There are different grades of ankle sprains, Grade I (mild), Grade II (moderate) and Grade III (severe). A doctor can determine what Grade sprain it is with a physical exam. The client most likely had a Grade II sprain of his left ankle since he did have some mild laxity. His pain, swelling and brusing had pretty much resolved by the time of the massage. The best treatment for a sprained ankle is to, initially, elevate and ice the ankle and take anti-inflammatory medications. Immobilizing the ankle joint is an option, too, if there is any instability. If the pain, swelling and brusing do not seem to improve after a couple of days, it would be best to see a doctor. The client said that he had done all of this treatment so far, although he did not see a doctor because he was improving.

My treatment plan:  Since my client's left ankle sprain had improved and he was having minimal swelling and tenderness, I decided to do a normal, Swedish massage on the client including the ankle. In regards to his left ankle, I did effleurage over the area to promote blood flow and then did some friction over the anterior talo-fibular ligament, which stimulates healing of the ligament while preventing scar tissue from forming. I also did some very gentle range of motion of the ankle, but avoiding any stretching. Following the massage, I taught the client how to do some friction massage to the area on his own and advised him to try to do this at least a couple of times per day. I suggested that he continue to elevate the ankle if he notices swelling and to wear his ankle sleeve if it feels unstable. I thought it was too soon for him to get back into playing soccer, but told him to wear support over the ankle if he felt ready to get back into exercising. He was also advised to schedule another massage with me in a week or two.

Expected Outcome:  I expected the client to continue to improve as long as he continued with the treatment he was already doing. His swelling and tenderness should completely resolve and he should be able to get back to doing his regular activities with no restrictions, even playing soccer again.

Actual outcome:  The client did not ever come back for another massage, but I was able to touch base with him to follow up on his condition about two weeks following his massage. He said that his ankle was doing much better and that the friction massage that I showed him really did help. He noted that he continued to have swelling, but that his ankle was pain-free. He was getting back into soccer and, so far, the ankle was doing well. He does wear an ankle sleeve while exercising or playing sports for support.