Here is some of the information I recently shared in my October newsletter. Each newsletter has a specific focus.  This month is focused on the fascia, myofascia and trigger point information. If you would be interested in receiving my newsletters, please head over to my contact page and sign up.

I receive a weekly update on anything published anywhere on the internet that includes information about fascia, myofascia and trigger points.  I try to glean the best of the information and provide a brief synopsis of the information. If you come across any information that you think would be good to share, please also feel free to pass that information along to: info@holistichealingarts.net

4.  A study, titled The Effect of Self-Myofascial release using tennis ball on pain in individuals with piriformis trigger points, published in International Journal of Basic and Applied Research, concludes: Subjects were asked to take small circular movements by sitting on a tennis ball under the buttocks for 60 seconds. The study concluded that Self-Myofascial Release using tennis ball helps in reducing pain and increasing the pain pressure threshold providing a simple yet effective alternative for piriformis trigger point pain.

6.  A study, titled Effects of Self-myofascial release using foam roller on range of motion and morphological changes in muscle: A crossover study, published in J Strength Cond Res. in May 2019, concludes: Self-myofascial release using foam roller is effective in improving range of motion in at least some conditions. However, its mechanism is still unclear.We hypothesized that the Foam Rolling intervention may increase ROM because of changes in fascicle length and aponeurosis displacement. Although ROM of both dorsiflexion and plantar flexion increased significantly after the Foam Rolling intervention (p<0,01), no significant differences were found in fascicle length and aponeurosis displacement before and after the foam rolling intervention.

7.  A case study, titled The effectiveness of positional release therapy in myofascial trigger points associated with recurrent lateral ankle sprain—a case study, published in World Journal of Pharmaceutical Research in Apr 2019, concludes: There was a significant decrease in the pain symptoms observed after the treatment, with the significant increase in Active ROM. It is concluded that Positional Release Therapy may be an effective treatment for pain and increase in Active ROM and pain decreased caused by trigger point due to recurrent lateral ankle sprain. (Peroneous muscles)

9.  A study titled A comparative study to find out the immediate effect of occipital muscle inhibition and static hamstring stretching on hamstring tightness in young adults—an experimental study, published in International Journal of Scientific Research in May 2019, concludes: Both the techniques showed marked improvement in the outcome measure, but the occipital muscle inhibition is more effective for the hamstring tightness and it is easy to perform for the participants and it was observed that the effect was persistent for longer time.

1. VIDEOS
• A video titled Vancouver Fascia Congress Shoulder study: Myofascial Trigger point Release by Christopher Gordon, shows the results of a study of myofascial trigger point release on the elasticity and sensitization of the tissue.

Here is some of the information I recently shared in my October newsletter. Each newsletter has a specific focus.  This month is focused on fascia, myofascia and trigger point information. If you would be interested in receiving my newsletters, please head over to my contact page and sign up.

I receive a weekly update on anything published anywhere on the internet that includes information about fascia, myofascia and trigger points.  I try to glean the best of the information and provide a brief synopsis of the information. If you come across any information that you think would be good to share, please also feel free to pass that information along to: info@holistichealingarts.net

1.  An article, titled Three-dimensional mathematical model for deformation of human fascia in manual therapy by Chaudhry, Schleip, et al., and published in J AM Osteopath Assoc in 2008 concludes: the three-dimensional model’s equations revealed that very large forces, outside the normal physiologic range, are required to produce even 1% compression and 1% shear in fascia lata and plantar fascia. Such large forces are not required to produce substantial compression and shear in superficial nasal fascia, however. The palpable sensations of tissue release that are often reported by osteopathic physicians and other manual therapists cannot be due to deformations produced in the firm tissues of plantar fascia and fascia lata.

2.  An informative article, written by Kimberlie Landers of Swedish Medical Center, titled Fascia: The Mysterious Tissue-N2 Physical Therapy offers an in-depth and understandable review of the tissue. It discusses: What is fascia, how can it relate to or cause pain, and what can be done about dense fascia, including kinesio-taping, Graston, cupping, skin rolling, and a technique called The Stecco Method of Fascia Manipulation, which revolves around “Centers of Coordination”.

3.  An article, written by the late Leon Chaitow and published in 2009 in Massage Today, titled Research in Water and Fascia: Micro-tornadoes, hydrogenated diamonds and nanocrystals references some information from previous articles:

In this article, Mr. Chaitow discusses an article by Dr. Martin Grumble about the characteristics of water in the body and the creation of nanocrystals involved in protein folding.

4.  An article by Simeon Niel Asher, titled Understanding Trigger Points-Embryological Development of Fascia provides an overview of the embryological origin of connective tissues (which) may provide some insights into the formation and location of trigger points.

5.  An article, Defining the fascial system published at the RMT Education Project, defines fascia as: …a sheath, a sheet, or any other dissectible aggregations of connective tissue that forms beneath the skin to attach, enclose, and separate muscles and other internal organs.  It also defines the fascial system: consists of the three-dimensional continuum of soft, collagen-containing, loose and dense fibrous connective tissues that permeate the body…

6.  An article by Ross Turchaninov and Boris Prilutsky, published at Science of Massage Institute, titled Ischemic Compression: To Be or Not to Be? Science of Trigger Point Therapy offers scientific support to explain the role of ischemic compression in increasing the blood supply to muscle and trigger point areas

7.  A very long article by Paul Ingraham published in Pain Science titled Trigger Point Doubts: a thorough review of the problems with the science of ‘muscle knots’ and myofascial pain syndrome discusses the sketchy science and dogma around the concept of trigger points.

10.  An article, published in the European Journal of Histochemistry, and summarized on the fascial fitness Australia site shows: the presence of CB1 and CB2 receptors in fascial fibroblasts suggests their possible role in modulation of fascial pain. The fascial pain is usually related to a fascial inflammation and/or a fascial fibrosis, and both could be related to an alteration of the endocannabinoid system. …The authors also hypothesized a possibility that the endocannabinoid system inside the deep fasciae is stimulated during manipulative treatments and exercises. 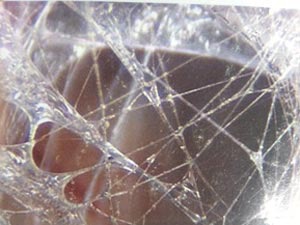